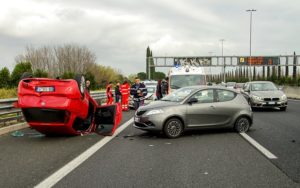 If you have been involved in a car accident, you might not be thinking so clearly. Everything starts to collide together as you face the stress of the accident and try to be as prepared as possible for moving forward with a claim. In the midst of an accident, many people might be scared and might not speak up, which means that they might miss out on opportunities such as talking to police at the scene or receiving medical attention. Today we want to focus on the many mistakes that people make following a car accident and why it is important to follow certain steps.

Leaving the Scene: You’ve been involved in an accident but you can tell that it isn’t a bad one. At first glance, it doesn’t appear that anyone is injured so you think it’s okay to drive away so that you can settle matters later. Here’s the thing: You should never simply drive away from the scene because, even when a wreck doesn’t look serious, you could be committing a crime of hit-and-run. Even if there are no visible injuries, you still have to exchange information.

Not Obtaining Information: Even if the accident appears minor, you should always obtain information with the other driver. Injuries might not be prevalent at the scene, but perhaps they will pop up the next day, leaving you feeling helpless. You’ll need the other driver’s information so that you can file a claim. These include aspects like the person’s name, insurance info, address, phone number, and more.

Admitting Fault: Perhaps you feel certain that you caused the accident and, seeing the other party in pain, you apologize for what happened. There is a specialized process that helps insurance companies dictate who is at fault for an accident and you don’t want to jump the gun and put yourself in the line of fire right off the bat. There won’t be any favors done for you if you admit that you believe you are at fault for the accident. The officer will determine what they believe happened based on the scene of the accident.

Negotiating with Driver: You might try to keep the accident off-record by offering money to the other driver and ensuring that their damages are cared for, but you don’t want to do this. The accident might actually turn out to be more serious than it appears, which means that you have just welcomed yourself into a more desperate situation.

Failing to Obtain Medical Treatment: Following an accident, you never want to go without medical care. Some injuries might not be easily noticed right off the bat. This is why you should go to the doctor if you feel even the slightest pain following your accident. Make sure that you receive documentation of any injuries that you might have sustained so that you can better support your claim as you move forward.

At Katz Kantor Stonestreet & Buckner, we want to help you gain successful results when it comes to your accident case and gathering the evidence needed to stay ahead. If you have been injured, you don’t want to move forward without representation, which is why we would like to help you get started on your case immediately. Contact us for more information today at (304) 713-2014.