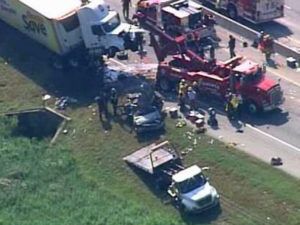 Over the years, many studies have been done regarding drowsy driving in truck drivers in West Virginia. Drowsy driving has prompted many West Virginia personal injury claims, as these events have led to disastrous results, both catastrophically injurious and fatal in nature. Research has actually found that almost one-third (28%) of commercial truck drivers suffer from some form of sleep apnea. By understanding what sleep apnea is and how it can impact truck drivers, we can prevent these serious accidents on our roads and save lives.

First of all, what is sleep apnea? Sleep apnea is a sleep disorder that causes an interruption of sleep for somebody while they are trying to rest. Sleep apnea is actually quite dangerous, as it could cause approximately 10 seconds or more of stopped breathing up to 400 times a night for a driver. For many people, sleep apnea goes unrecognized, so somebody might suffer from the condition for years before they realize that they have it. Because of this, it could have a serious impact on a truck driver’s health and wellbeing.

Some of the symptoms that point to sleep apnea include aspects like loud snoring, headaches that take place in the morning, gasping or choking while attempting to sleep, excessive sleepiness in the daytime, disturbed sleep, and memory issues. There are some factors that put people at a higher risk, such as having a family history of sleep apnea, having a small upper airway, or being overweight among many other factors.

Sleep apnea affects many aspects of your sleep, which means that it can have a huge impact on the driving that you do during the day. A truck driver might find that their alertness and performance is widely affected by sleep apnea. If you are not treated for this condition, you might not be able to stay awake during driving or react quickly when a sudden hazard occurs. This can turn into a dangerous situation in the blink of an eye.

Because a higher safety threshold is needed in truck driving, federal court rulings have been passed to require sleep apnea testing in truck drivers. Over the past few years, however, the tide has changed and many of these regulations have been pulled. The FMCSA says that up to 30% of commercial truck drivers have mild or severe sleep apnea. If an accident takes place due to drowsy driving and it is determined that a truck driver has sleep apnea, who is liable?

If the truck driver was driving within the line of work, the truck driver or the company who hired the driver could be liable for the injuries that result. It is imperative to understand that you have rights in the event of a truck accident that was the fault of another driver.